Best known as the Arcos de Cristal, the central room of the Tropicana Nightclub in Marianao was an extraordinary synthesis of technology, architecture, and landscape.[i] The project consisted of the construction of a new air-conditioned salón to increase the comfort and capacity of the existing nightclub. Borges imagined five circular concrete vaults, seven-centimeters thick, of different diameters and placed eccentrically to each other. Their width decreased from twenty-six to twelve meters and their height from ten to five meters above the stage, thus achieving a powerful telescopic effect. The open segments created at the intersection of the vaults were filled with large panes of glass, thus the name Arcos de cristal, which opened the structure to the sky and the dense tropical vegetation within which they were planted.[ii] The following year, Borges added the open-air lounge Bajo las estrellas (Under the Stars), covering the bandstand with a spectacular sculpture that represented the mathematical and geometrical process of designing thin shells.

[ii] Educated in the United States at Georgia Tech and Harvard University, Max Borges Recio was the son of Max Borges del Junco, engineer and architect (1916, 1917), who on the side of his architectural practice founded the construction company Construcciones Max Borges, later to become Max Borges e Hijos. 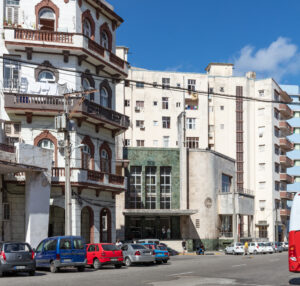 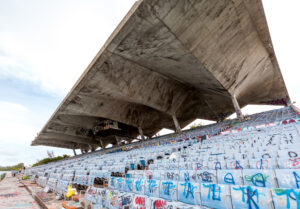